Modern History of the Governor's Cup: By the numbers

If you buy something from an SB Nation link, Vox Media may earn a commission. See our ethics statement.

Share All sharing options for: Modern History of the Governor's Cup: By the numbers

You might not be aware of this, but on Saturday Kentucky will play Louisville in football.  It's the 18th meeting between the two schools since the rivalry was renewed in 1994.  Louisville holds a 9-8 edge in that time, but Kentucky of course has won the last 4 games in the series and will look to even that record tomorrow evening.

I thought it would be fun to go back through the last 17 games* and look at how the two teams have fared against each other in some of the more important statistical categories during that time.  Using old box scores from The USA Today archives, ESPN, and Yahoo I put together a few visual comparisons of how the two teams have performed.

*Actually it's only the last 16 games since the box score for the 1994 game doesn't seem to exist on the internet - something I found to be rather surprising.  I mean, what is this, the dark ages?

So for example, UK's highest scoring output came in 1998 when they scored 68 points. 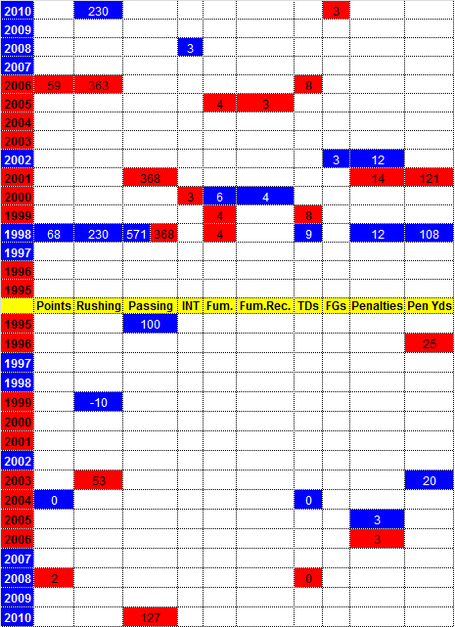 Next is a graph showing which school "won" (had the best total) each category each year.  A red box indicates Louisville outperformed UK that year, while a blue box shows the opposite.  A white box indicates the two schools tied. 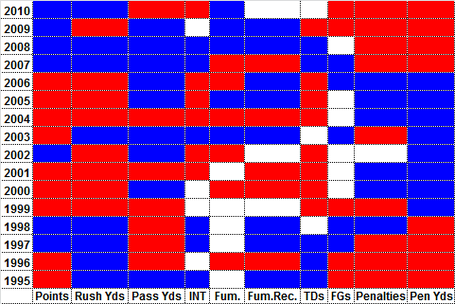