The Kentucky Wildcats have now played 8 games, which brings us through 25% of the regular season. They've played a variety of opponents from both small conferences and large and are coming off their biggest game against the toughest opponent they will face this season (at least until a road game at Florida anyway).

That makes this a good time to take an in-depth look at where the team is collectively on offensive and defensive and how the players are doing individually in those areas. The last two days were spent on offense, today and tomorrow we'll see how the team is coming along defensively.

First up, here are how Kentucky's opponents have fared this season on offense as measured by the 4 Factors. Kentucky's defense in these areas is listed for comparison. As was the case with the offense in Part 1, the Opponent Rates are a combination of all their games and not just the ones played against UK. The numbers are NCAA ranks as of Monday. 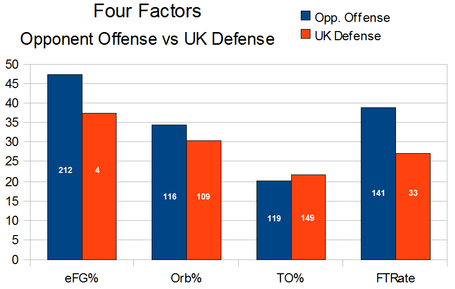 The Kentucky defense has held its opponents below their season averages in each category (or above, in the case of forcing turnovers) but two areas in particular standout:

The field goal defense is likely to continue to rank very highly. Other than Indiana, none of UK's remaining non-conference opponents have shown any particular strength at making shots. That will change as UK moves into conference season but keep in mind that if the Cats start allowing a greater percentage of shots in SEC play it will almost certainly be due to the competition getting better and not the defense getting worse.

For individual players I have listed the standard defensive stats (Defensive Rebound %, Steal %, and Block %) along with defensive numbers compiled from the DSS. The DSS numbers only cover the first 7 games, up to St. Johns since I don't have a replay of the UNC game available. The DRB%, Steal%, and Block% include all 8 games.

For the Defense Rating, keep in mind that it is strongly tied to the Team's Defensive Efficiency. Last year for the games covered by the DSS that number was 99.1. This year it is 76.8 through the first seven games. Also, last year I didn't distinguish between 2 point shots and 3 points so I don't have those numbers, just the overall FG% defense.

Darius Miller has always been a pretty good defender. This year he is forcing more turnovers and defending shots better than last, even with a slightly lower Block%. All that has combined to improve his Stop % to 65.3, but he hasn't had to make as many defensive plays this year.

Miller isn't grabbing defensive rebounds quite as often, but it is interesting that it is similar to his 2010 number. This year, UK features two potentially very good/elite big men in Terrence Jones and Anthony Davis and in 2010 the team had DeMarcus Cousins and Patrick Patterson gobbling up rebounds. The two years where Miller posted his best DR% are the two years where UK really needed other players to step up in that area.

Terrence Jones was an outstanding defender last year and he is playing good defense this year. His defensive rebound numbers are down a bit, but he has compensated by stopping more shots and forcing more turnovers. Jones is also fouling more, although in his case "more" is pretty relative - coming down the stretch last year Jones simply did not send other players to the line. It would be nearly impossible for a player with his responsibility in the paint to maintain that rate.

I'm not certain to what extent the drop in DR% is due to the presence of Anthony Davis. Research at the NBA level has confirmed that there are diminishing returns when you put several good rebounders together on the floor and it is likely that Davis is grabbing a number of defensive boards that Jones would otherwise have gotten to. This is an area that bears watching.

Much like he has on offense, Doron Lamb is continuing his play on defense from last year. There is a lot of similarity in the numbers, though Doron is making a bigger effort on the defensive glass and he is fouling less in comparison to the number of shots he defends. This is offset by opponents connecting on more shots than last year. While I would never describe Lamb's defense as "aggressive", I wonder if he is backing off a bit this year in comparison to last year? It could also be a small sample size thing, Lamb isn't involved in a lot of plays which means even small differences can have a large impact on his percentages.

Now we get to the main player I want to talk about: Eloy Vargas. Vargas has been sensational in his limited minutes this year. That Defensive Rebound % is Kenneth Faried territory and double what he did last season. He is clearly more aggressive and active in games which has bumped that FT Rate up from last year, but that's a very small price to pay for the improvement on the glass. Coach Calipari has asked Kyle Wiltjer to be more aggressive in his defense and going after rebounds - Vargas is giving the team exactly that. Against UNC, Vargas was the only Cat who really gave Tyler Zeller a battle in the post and I though he acquitted himself quite well in that game.

One of the things I love about Eloy's defense is that when his man is away from the basket, Eloy will get a hand in the air to disrupt the view of the basket. Watch a random game sometime and see how little this happens with big men when they are away from the basket. It seems to me that his defense should be earning him more minutes in games, if only to see if he can consistently maintain it over 10-15 minutes (or more). Free Eloy!