The Kentucky Wildcats have now played 8 games, which brings us through 25% of the regular season. They've played a variety of opponents from both small conferences and large and are coming off their biggest game against the toughest opponent they will face this season (at least until a road game at Florida anyway).

We now have a week until the next game against a much improved Indiana team (but don't forget the women have a big game against Duke on Thursday!). That makes this a good time to take an in-depth look at where the team is collectively on offensive and defensive and how the players are doing individually in those areas.

We'll look at how the team is performing in the 4 Factors and compare that performance to what their opponents have done in the same areas this season. For the players we'll look at their tempo-neutral and shooting stats to see where they are playing well and where they might improve. Click the link for more details on these numbers.

All stats were collected from Statsheet.com and Ken Pomeroy's site.

First, let's look at the Kentucky offense in the 4 Factors compared to what their opponents are allowing on the season. The graph below shows the composite defensive average for Kentucky's 8 opponents through Saturday's games compared to how UK is performing on offense. In other words, this includes not just what those teams did against UK, but in all their games this season.

For example, UK's opponents have collectively held opposing teams to a 48.1% effective Field Goal % this season, but UK has shot 53.7%. 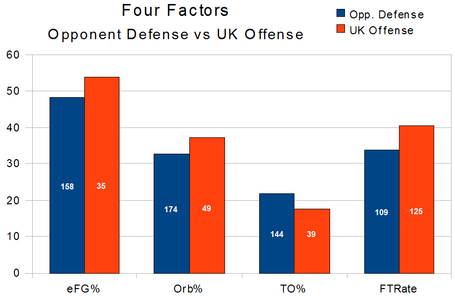 The numbers on the bars indicate the rankings for each category according to KenPom. For the Opponent's Defense, the number indicates where it would rank for a hypothetical team (so a team that holds its opponents to 48.1% eFG% would have the 158th ranked defense in that category, as of Monday 12/5).

Overall you can see that UK has outperformed what their competition is allowing on the season: UK is shooting better, getting a bigger share of their own misses, turning the ball over less, and getting to the free throw line more than an average team would against this same set of teams. That is as it should be, since UK is quite clearly not an average team! In particular, UK is getting to the free throw line quite a bit more than their opponents have allowed in other games, and that number is really not inflated by fouls to stop the clock at the end of games. It's good that UK is better than average across the board, but it seems like this team should be much better on the offensive glass. That will be something to watch going forward.

Now, on to the players: Darius Miller, Terrence Jones, Doron Lamb, and Eloy Vargas. I've included the previous seasons so you can see the growth that each player has made.

Miller's year-to-year improvement really is fascinating. As a freshman he showed flashes of being good, but turned the ball over waaaaay too much (as did everyone that year not named Jodie Meeks or Patrick Patterson). As a sophomore he drastically cut down his turnovers, improved is 2P shooting and saw a massive jump in his Offensive Rating (ORtg). As a junior he maintained those improvements and added some dead-eye shooting from the perimeter and bumped up his ORtg another 4 points. This year, despite poor perimeter shooting Miller has again improved his ORtg - this time by doubling his assist rate and shooting his 2's at a terrific 58.3%.

Something else to point out - Miller is looking for his shot more this season. His SH% (his share of the FG's that are attempted when he is in the game) is 19.9%. Keep in mind that in a perfectly balanced offense all players would have a SH% of 20.0% (5 players divide up 100% of the shots). The UK offense has been incredibly balanced this year and it is helping everyone.

One more thing about Miller. Do not worry about that 26.1% on his 3P shooting. This is a classic example of "Small Sample Size" (SSS) - i.e. when the number of attempts is relatively small, weird things can happen. From all reports, Miller is still shooting the ball great in practice and he shot well at BBM, the B-W game, and the exhibitions. This is just one of those things. I bet that by the time we hit conference season that mark will be up around 38-39% or better. If you see someone complaining about Darius's 3's, tell them to chill. (You could also tell them to "chillax" but they would be within their rights to punch you in the gall bladder). He'll be fine.

Perhaps no one has benefited more than Terrence Jones from the arrival of additional options on offense. For most of last year Jones (along with Brandon Knight) was the primary scoring option and his ORtg was typical of a player - especially a freshman - in that role. This year with more help around him Jones can afford to be smarter and more selective with his shots. That, along with improvement over the summer, has elevated his offense. You can see that Jones is shooting much better across the board this season and that is where the improvement in his offensive rating is coming from. It's notable that Jones is averaging basically the same points per game as last year (15.0 to 15.7) even while his usage in the offense has decreased by 20% - that's logistics Efficiency!

Really, the only thing to ask for more of is offensive rebounding. The dip in his OR% is small, but Jones should be improving in that area. I don't know how much of that is SSS, the presence of Anthony Davis, spending time on the perimeter or other factors, but Jones is too good of a rebounder to be at 7.7% in this area.

Last year Lamb's role was to knock down shots and serve as the emergency backup to Knight at point guard. It's a role that generally doesn't involve a lot of turnovers. This year Lamb has taken on more responsibility in running the offense in the early going and yet he's managed to decrease his Turnover Rate (TO%) despite filling a role that typically leads to more turnovers. It's still early, and Lamb's 15.2 Assist Rate (A%) is not ideal for a backup, but it's certainly good to see. Other than that, Lamb continues to do everything well that he did as a freshman. He's getting to the line a bit more, a plus for someone who shoots 80%+ and of course he's always been great from 3. I'm sure Cal can find areas that Doron needs to get better, but there's really nothing to complain about and a whole lot to celebrate.

I include Vargas for the sake of completion. Eloy's role is to play defense and whatever offense he can give the team is a bonus. This year has been much like last year on that end of the floor (but not on defense! Hoo-boy I can't wait to talk more about Eloy's defense!) Really, his offense comes so infrequently that we really can't say anything meaningful about his numbers, except that overall he's been a bit above average. It's certainly nice that he isn't turning the ball over as much and is a bit better at hitting his 2's, but it's such a small sample size that the differences don't amount to much.