Breaking Down Kentucky at Vanderbilt

Share All sharing options for: Breaking Down Kentucky at Vanderbilt 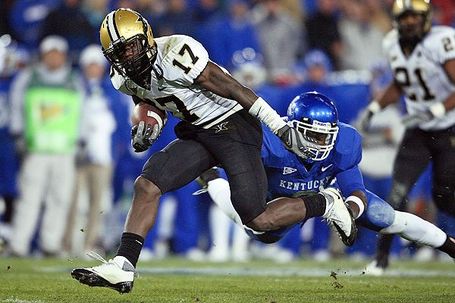 Take the above image and repeat about five or six times and you have Commies at Cats, 2008.  Several blogs lately have pointed out that the Doormat Bowl has evolved from answering the question of "who's going to be at the bottom of the league" to "who's going to be at the bottom of the league, but also gets to go to a bowl?"  That wasn't the case in 2008, as Kentucky got torched and still went to the Liberty Bowl.  It might not be the case in 2009, either, as South Carolina or Tennessee could easily fail their way to the same East basement that Vandy and UK have struggled so mightily to climb out of.  Of course, every conference game is important, but, because UK/VU tends to happen so late in the season, it always seems like a fulcrum-type game, and 2009 looks to shape up that way, too.  Chris Low calls the game a "fork in the road" for Kentucky, and Team Speed Kills calls it one of the 10 games that will shape the SEC this year.

Cocknfire over at TSK does a pretty good job breaking down the game, and I've taken a look at it myself recently, albeit a brief one.  Of all the games on the schedule this year for both the Cats and Commodores, this was the hardest one for me to pick (or push).  Here's a deeper look, and why it's probably not going to matter come November 14th anyway:

Coaches: Rich Brooks (123-150-4 in 24 total collegiate seasons, 32-41 in 7 years at UK); Bobby Johnson (87-92 in 16 collegiate seasons, 27-56 in 8 years at Vanderbilt).  Oddly enough, Bobby Johnson is the longest tenured coach in the SEC.  Both of these guys can really coach, and both have led historic turnarounds in their schools' football programs.  I'll say this for Coach Johnson, though:  he's done more with much less, and also without an athletic department.  Brooks's efforts and success have been well documented, and the fact that he's still here after two and a half miserable seasons due to probation, etc., is a testament to his abilities and philosophy.

Offenses: Vanderbilt's offensive line last year was, in a word, bad.  Luckily, they had fleet-footed Chris Nickson under center to scramble around behind them.  Unluckily, Nickson's list of options was fairly limited: dump it off to someone who wasn't covered, try and run for yards, throw it away, or take a hard sack.  The latter two options were the ones most often employed.  Spelling Nickson occasionally was Mackenzi Adams, who played well enough in his opportunities but not so well to get the starting nod for 2009.  It's my expectation that Larry Smith will get that honor, and he's got much better blockers this time around.  Short white guy running back Jared Hawkins returns to a role he was oddly effective in last year.  The receivers are young, and that's probably the biggest question mark in the whole unit (aside from "who the hell is that guy, these jerks don't put names on their jerseys").

Ken's going through this sort of thing for Kentucky, but the line for the Cats this year should be pretty good.  Christian Johnson, Jorge Gonzales, and Zipp Duncan are all coming back, and T.C. Drake must've accidentally gotten his name on some watch list for tight ends.  The receivers were bad last year aside from Dicky Lyons, Jr. and Randall Cobb, but showed some promise in the bowl game.  The running backs are good, but it would be nice to see some gains between the tackles.  I'm pulling for Hartline because it's too soon to throw a freshman into the SEC meat grinder and Cobb's way more effective in open space than behind center.

Who gets the edge?  Like so many things about these teams, there's not much room for a difference.  There are lots of questions at receiver.  The lines are both good, though I'd give Kentucky's a better grade.  I'd give Hartline a push at QB because even though he's more experienced, he wasn't good last year.  Kentucky's got more proven backs than the Dores do.  I'll give the Cats a slight advantage here.

Defenses: Vanderbilt's defense is why they made it to a bowl last year.  D.J. Moore was a nightmare for everyone who faced him, and he had a freakin' coming out party against Kentucky last year.  Fortunately for the Cats, he's gone now.  In his place, though, are Myron Lewis, Jamie Graham, and Ryan Hamilton, all effective tacklers and coverage backs.  The defensive line returns most of its starters, and the linebackers are an experienced group as well.

Kentucky's secondary is equal to if not better than Vanderbilt's, returning Trevard Lindley, Ashton Cobb, Paul Warford, and Matt Lentz.  The linebackers are also a talented group, with Micah Johnson returning along with Sam Maxwell and Danny Trevathan.  The question marks are all up front, especially at the ends.

Edge here is even more difficult to tell.  Will Kentucky's D-line firm up by November 14?  How much of a pounding has each unit taken over the season?  The interesting part is the offense-defense matchup; neither offense is expected to be especially effective, so the defenses might be better than we think in this game.  Push.

Special Teams: I'm not a Lones Seiber fan.  Here's hoping he gets his act together this year, because if Kentucky wants to win games, field goals are probably going to be pretty important.  Vanderbilt returns Music City Bowl MVP punter Brett Upson, who is about as good as Tim Masthay was in terms of putting the other team in a hole as far as field position.  Ryan Tiddlywinks (I can't spell his last name without looking it up) will probably have his hands full this year unless the Wildcat offense becomes much more effective at keeping the ball.

Kentucky's bread and butter in the past has been its return game, and I don't see this year being any different with any combination of Randall Cobb, Alfonso Smith, Gene McCaskill, Derrick Locke, and Kyrus Lanxter filling those roles.  They can't catch passes consistently, but at least the catch punts and kickoffs.  I'm not totally sure who'll be returning kicks for the Dores this year, but I'd have to think Jamie Graham will probably be in the mix.

This is a push for me because even though I think the Cats have the better return unit, I have no confidence in their kicking ability until further notice, and Brett Upson is a stud.

Schedule:  Vanderbilt plays 12 uninterrupted weeks this year and the Kentucky game falls on Week 11 of their schedule.  This game will be the 10th consecutive game on the Wildcats' schedule also.  Kentucky goes through the meat grinder a little earlier than the Dores do, playing Florida and Alabama in the first five weeks of the season, but they get a break before going to Nashville in the Eastern and Louisiana-Monroe games.  Vanderbilt will be coming off a brutal stretch of games against Georgia, at South Carolina, Georgia Tech, and at Florida.  No way do they make it through there without some injuries, so the lines and backs might be pretty dinged up at that point.  It's a home game for the Commies, but Kentucky always travels well down to Nashville and the Dores have a tough time filling their stadium.

Conclusion:  I think that the constant pounding in Vandy's schedule and what I hope is an emerging offense from UK will be too much for the Dores to overcome.  Thing is, though, this game is always hard-fought and extremely important to both teams, and anything can happen.  When the week before this game rolls around in a few months, you can probably throw all of the above out the window.  Just be careful when you do that, though, there might be a person down there.