The Big Blue Daily Mail -- Where Will Jodie Meeks Go?

Share All sharing options for: The Big Blue Daily Mail -- Where Will Jodie Meeks Go?

Most Kentucky fans are busy wondering where Jodie Meeks will go in the draft on Thursday, and there are quite a few people who are weighing in on the subject.  Of course, nobody knows for sure right now, but some people claim to have heard things, so we will pass all this information on with the caveat that it as all unverified and should be considered speculation.

In the Blue corner, we have the "He has a guarantee" crowd.  The first article I saw on this was by Matt Jones at KSR in which the Chicago Bulls and the Minnesota Timberwolves figure prominently.  As a companion to this, but a different story from apparently different sources over at the Hoops Report.  They say that Jodie has a guarantee early in the second round.  Hoopinion has Meeks going at #23 on his draft board (not mock draft), which seems a bit high to me.  My best guess is the last three picks of the first round or the first five picks of the second.  I don't know about guarantees, but it is definitely possible that Meeks could wander up into the first round.

In the Red corner, we have the doubters.  Chad Ford of ESPN is the doubtingest doubter of all, and according to the Courier-Journal's Brett Dawson, Ford has Meeks out of the draft altogether, raising the spectre of a Randolph Morris loophole.  John Clay very much doubts that Meeks has been guaranteed anything, citing the fluidity of the draft, but he doesn't try to figure out where he will end up.  Canis Hoopis has Meeks showing up around #45.  The Examiner mostly agrees with Canis Hoopis, showing Meeks 11 picks into the second round.

Which one will be right?  I have no idea.  There is an argument to be made that Meeks made his decision based on an understanding he would not be left out in the cold.  There is also an argument to be made that something other than just the coaching change is driving Meeks to challenge the draft with nothing more than his own self-confidence.  Neither one of them finds much support in the media and I have no inside sources, so I can't tell you which is more likely to be accurate.  We will know in a few days time. 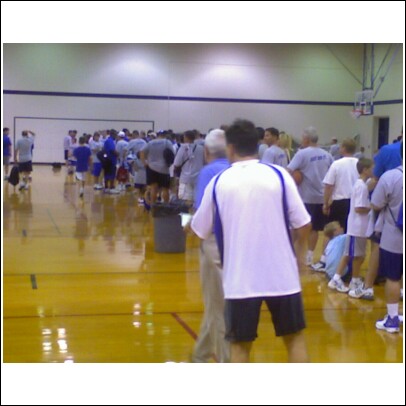 In other news, John Calipari had his father-son camp this past weekend, for which Memphis Wildcat has given an update in the post below (for which we are grateful) and for which several links were posted yesterday.  But I thought this was an interesting picture which Memphis Wildcat took at an event.  It shows a rather impressive line for people trying to get John Calipari's autograph.

Speaking of Calipari, he is in Northern Kentucky today giving a talk.  This guy is non-stop action, I have no idea where he gets the energy for all this after the camp this past weekend.  While all that is going on, Calipari is busy recruiting Doron Lamb of Oak Hill, who is apparently a very strong UK prospect for next year, according to Adam Zagoria's blog.

And now, for the rest of the news:

Other News of Interest